Reminisce about days of old with the “As We Were” photo series by Clive Barden. 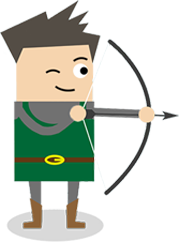 Samlesbury Longbow Archers have been based at Preston Grasshoppers’ Rugby Union Club since November 2004. The Club is a pure longbow club and at present has approximately 40+ members.

Shooting usually takes place on Monday (and in the evening during summer), Thursday and Saturday mornings. Club members may shoot on any day, once a probationary period has been completed, and if the ground is not being used by anyone else.

The club is affiliated to the British Long‑Bow Society (BLBS) and therefore all club members must belong the BLBS and comply with the society’s rules.

The club hosts four British Long‑Bow Society shoots (at which only BLBS members may shoot).  The club also holds a number of open shoots including the Four Counties shoot and the Azincourt shoot (in medieval dress) at the end of October.  In addition the club holds regular competitions throughout the season including a handicap shoot one Saturday in each month.

The dates for all shoots can all be found on the Events page.